Here are the salary scales of Ireland Army

All public servants who are in pensionable employment — including members of the PDF — are liable to pay a Pension-Related Deduction (PRD) regardless of the date they join the public service. Commonly known as the ‘pension levy’, this was introduced by Government as part of a package of emergency financial measures. The PRD is separate from the standard employee pension contributions and no additional superannuation benefits are earned as a result of the deduction.

This Notice is subject to revision as required.

This scale also applies to individuals who have already been made a written offer of employment before or on 31 December 2010 but do not take up their position until on or after 1 January 2011.

However while enlisted personnel on appointment as a cadet will be placed on the 1st point “mark-time” arrangements will apply should their gross income (regimental pay plus allowances) be greater that the 5th point of the scale. On commissioning he or she will be placed on the 1st point of the appropriate pay scale, with “mark-time” arrangements applying where their gross salary as a cadet exceeds the 1st point of that scale. Enlisted personnel are liable to pay full PRSI at contribution Class H.

In general, persons commissioned as officers following completion of a Cadetship under this competition, will qualify for the rates of pay and allowance shown below. In common with other persons who join the public service on or after 6 April 1995 they are liable to pay full PRSI (Class A), as well as appropriate personal and survivors’ occupational pension contributions.

The following are the current annual rates of pay and allowances (Class A) from 1 January 2011 for officers who are new entrants to the Public Service on or after 1 January 2011.

Military Service Allowance is payable at the rate of â‚¬4,257.00 to officers holding the commissioned ranks of Second Lieutenant/Lieutenant (Army & Air Corps) and of Ensign/Sub Lieutenant (Naval Service).

An officer or cadet of the Air Corps who is engaged in flying duties is also paid flying pay which varies in accordance with his/her rank and service.  The current rate is â‚¬1,144 per annum for a trainee pilot, rising to â‚¬6,365 after 6 years service.

Best and Worst Universities in Uganda ,2017 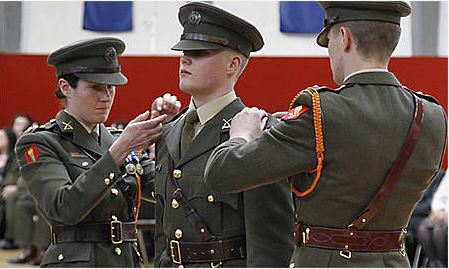