Tuko News is currently ranked the 5th most popular blog in Kenya. It’s income and monthly page views is what most bloggers would like to know in order to determine whether how much effort they can put for them to reach that level.

The approximate monthly net income of Tuko News is Ksh 1.2 million. The company’s estimated gross income per month is Ksh 3 million while expenses range between Ksh1 million to Ksh 1.5 million. 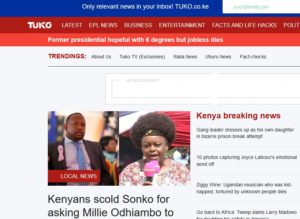 Tuko makes money from AdSense, Sponsored content and direct advertisements. Below is the approximate amounts earned from each segment;

The Company is owned by Genesis Group which also owns Legit.ng. It started its operations in Kenya about five years ago and has since grown to become one of the most popular sites in the country.

Is there any future for bitcoin?

Is cryptocurrency worth investing your money in?

Is there any better currency than bitcoin?

Things to Consider When Starting Out in Forex

What are Crypto Mixers? (Explained)

How to subscribe for the best predictions for Sportpesa Mega jackpot...