Five years on from discovering the Higgs boson, a team of international scientists including Liverpool particle physicists, have discovered a brand new heavy particle at the LHCb experiment at CERN’s Large Hadron Collider (LHC).

The new particle, named Xi-cc++, is part of a family of “doubly charmed baryons” that are predicted to exist by the Standard Model theory of particle physics, but this is the first time scientists have been able to confirm their existence.

Tara Shears, Professor of Physics at the University and Liverpool’s LHCb group lead, said: “This particle has camouflaged itself well, but the quality and precision of LHCb’s data has finally allowed us to pinpoint it – a quality and precision due in no small part to the VELO silicon particle detector that the Liverpool group played a large part in building.

“What’s so exciting is not just that we predicted and are now seeing this particle for the very first time, it’s that we’re discovering more particles and uncovering more about the universe as we analyse more data. We’ve only collected a fraction of our ultimate dataset, and we’re designing and building the next generation particle detectors to give us the best quality data throughout our datataking. Who knows what our data will reveal next? ”

Nearly all the matter that we see around us is made of baryons, which are common particles composed of three quarks, the best-known being protons and neutrons. But there are six types of existing quarks, and theoretically many different potential combinations could form other kinds of baryons. Baryons so far observed are all made of, at most, one heavy quark such as a bottom or charm quark.

University of Glasgow physicist Dr Patrick Spradlin, who led the research and announced the findings at the European Physical Society Conference on High Energy Physics in Venice, said “The properties of the newly discovered baryon shed light on a longstanding puzzle surrounding the experimental status of baryons containing two charm quarks, opening an exciting new branch of investigation for LHCb.”

“In contrast to other baryons, in which the three quarks perform an elaborate dance around each other, a doubly heavy baryon is expected to act like a planetary system, where the two heavy quarks play the role of heavy stars orbiting one around the other, with the lighter quark orbiting around this binary system,” added Guy Wilkinson, former Spokesperson of the collaboration.

The observation of this new baryon proved to be challenging and has been made possible owing to the high production rate of heavy quarks at the LHC and to the unique capabilities of the LHCb, one of the four main experiments at CERN solving the mysteries of our universe, which can identify the decay products with excellent efficiency. The Ξ_cc^(++) baryon was identified via its decay into a Λc+ baryon and three lighter mesons K-, π+ and π+.

The observation of the Ξ_cc^(++) in LHCb raises raises expectations that other representatives of the doubly charmed baryon family could be detected. They will now be searched for at the LHC.

This result is based on 13 TeV data recorded during run 2 at the Large Hadron Collider, and confirmed using 8 TeV data from run 1. The collaboration has submitted a paper reporting these findings to the journal Physical Review Letters. 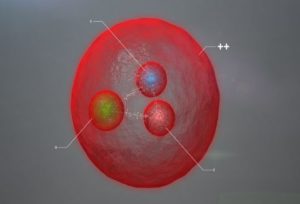 Amount of money you can make from Academic writing in Kenya per month, testimonies

How to Deposit Money to Sportpesa via MPESA

June 30, 2022
Sportpesa is one of the methods used to deposit money to the company. Sportpesa minimum stake is Ksh 10.You can deposit per transaction is...

June 30, 2022
Mozzartbet stands out as one of the best betting sites in Kenya. It offers opportunities to customers to bet on football matches, casino, jackpots...

How to deposit money to Betway via MPESA

June 30, 2022
You are allowed to deposit money to Betway via MPESA.The company’s Paybill number is 880185. To deposit, follow this procedure: Go to M-PESA on your phone.Select...

What You Need to know about GBet South Africa

June 29, 2022
GBet South Africa is a leading betting site in South Africa.There are several important things you need to know about the site,like how to...

KCSE Requirements To Pursue a Degree in Law in Kenya

January 12, 2017
A degree in Law is one of the best courses to pursue in Kenya. Several universities offer the course but few are accredited. The...

December 31, 2016
Jomo Kenyatta University of Science and Technology is one of the public universities which offer the best engineering and agriculture courses. If you intend...

Job Groups and Salaries in Kenya

January 12, 2017
Journalism and Mass Communication is one of the best careers in Kenya. The course, compared to popular courses like Medicine and Law, does not...

How to Deposit Money to Sportpesa via MPESA